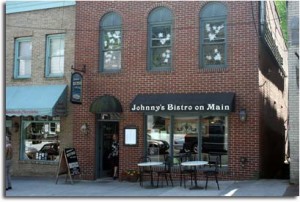 A spotlight shines on locally owned shops and restaurants in historic Ellicott City during First Fridays, an event held the first Friday of each month from April to December.

First Fridays began in 2010 as a way to attract more business to the historic area. The event has blossomed into a fun gathering for locals and visitors to enjoy. First Fridays includes sidewalk specials and evening shopping from 5-9 p.m. In addition, there is a Yappy Hour and live local music.

It all takes place in historic Ellicott City, which has won local and national accolades. Locally, Ellicott City was voted the Best Place to go on a First Date in the 2014 Best of Howard County contest.

Nationally, the city garnered national attention in 2014 when it was named a top four destination in Parade Magazine’s Best Small Towns in America contest, and when Money Magazine ranked Ellicott City No. 6 in their list of the 50 Best Places to Live in America.

Ellicott City’s historic district has been carefully preserved. There are more than 60 businesses in the historic downtown. Here is a peek at just a few of the shops that have participated in First Fridays.

A Journey from Junk is a vintage boutique on Main Street. This funky shop opened in 2008 and offers everything from clothing and accessories to furniture and paint. You’ll want to check out their vintage boots and fun trinkets for the home, too.

Out of Our Past Antiques is a mix of late 19th century and early 20th antiques. It offers a wide range of items at reasonable prices, whether you’re looking for an accent piece, a unique gift, something for your collection or a practical piece you will use daily,

The Wine Bin is a boutique wine store that sells a wide range of wines and spirits. Whether you’re a novice or a connoisseur, you will feel comfortable shopping at the Win Bin and find something to your taste. The Wine Bin features 200 wines under $20, as well as specialty vintages, premium spirits and gourmet beers. During First Fridays, join the Wine Bin for Yappy Hour, a pet-friendly wine tasting held in the shop parking lot. In addition to adult beverages, enjoy handmade, locally made chocolate.

The Wine Bin also offers free outdoor movies on Saturday nights June through September. Held in the shop’s parking lot, enjoy a wine tasting before the movie. Bring your own chair, snacks and a blanket. June-August, the movie begins at 9 p.m. In September it begins at 8 p.m.

Ellicott City was first known as Ellicott Mills. It was settled in 1772 by three brothers from Pennsylvania, John, Andrew and Joseph Ellicott. The brothers established a flour mill upon their arrival, setting up the town to become one of the largest milling and manufacturing towns on the East Coast. In 1830, B&O Railroad built a station in Ellicott Mills, the first outside of Baltimore. In 1867, the town’s name was changed to Ellicott City.  The B&O Railroad station is now a museum open for tours daily.

The Wayside Inn in Ellicott City has a rich history, too. This circa 1780 inn offers a romantic retreat from everyday reality. It’s the perfect place for you to escape. After a day sightseeing in beautiful Howard County and a fun time at First Fridays downtown, come back to The Wayside Inn where you can relax in one of our six beautiful but quaint rooms. Wake up refreshed and enjoy a delicious gourmet breakfast that you’re sure to love.