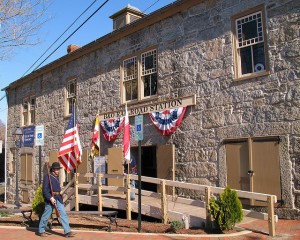 Train enthusiasts and history buffs, take note. While you’re in the area, you make sure you visit the Ellicott City B&O Railroad Museum.

The Ellicott City Station is America’s oldest surviving railroad station. Step back in time as you explore the Main Depot, which was built in 1830-31 and the Freight House, which was built in 1885. View a replica of the first horse-drawn passenger rail car, as well as a 1927 Caboose. The first 13 miles of commercial railroad in America was laid by B&O Railroad connecting Baltimore with Ellicott City, then known as Ellicott Mills. This station offers the opportunity to learn not only about the nation’s first railroad, but how it impacted the growth of Ellicott City.

Consider purchasing a combination admission ticket to visit the Ellicott City Station and the B&O Railroad Museum in Baltimore.

The B&O Railroad Museum in Baltimore features the oldest, most comprehensive American railroad collection in the world. It’s located on a 40-acre historic site that contains buildings and structures that have been restored and carefully preserved, as well as the first 1.5 miles of mainline railroad built in the U.S.

The B&O Railroad is located in one of Baltimore’s historic southwest neighborhoods at the original site of the historic Mt. Clare Shops. The museum is less than a 30-minute drive from The Wayside Inn.

B&O Railroad Museum in Baltimore is open seven days a week. Monday-Saturday, it is open 10 a.m.-4 p.m.; Sunday, it’s open 11 a.m.-4 p.m. The museum is closed on certain holidays: Easter Sunday, Memorial Day, Independence Day, Labor Day, Christmas Eve, Christmas Day and New Year’s Day. Be sure to purchase the combination ticket so you can visit both the Ellicott City Station and the B&O Railroad Baltimore Museum at a discounted rate.

The museum offers exhibits year-round, exhibitions that change regularly, as well as seasonal train rides on the nation’s first 1.5 miles of mainline railroad.

Year-round, you can see various locomotives and rolling stock in the Roundhouse, which is a 22-sided building that spans nearly an acre. It contains 22 bays which housed trains that were being serviced, as well as a 60-foot turntable in the center (that still works!) for positioning the trains.

Be sure to visit the Alex Brown Exhibition Gallery, which currently contains the Smithsonian Institute’s collection of railroad models, a collection of clocks and pocket watches used by railroad employees, as well as a special exhibit that runs through 2015 about the importance of the railroad during the Civil War. This gallery and the gift shop are both in the Annex Gallery.

This is the final year for the featured exhibit, “The War Came by Train,” which explains how the railroad and railroaders shaped the course of the Civil War (1861-1865).

April 18 and 19, 2015 the B&O Railroad is holding a special event that commemorates President Abraham Lincoln’s funeral procession, which made its way by train through Baltimore on April 21, 1965. This year marks 150 years since the end of the Civil War. The special events begin at 11:30 a.m. on April 18 and 19 and include the reenactment of Lincoln’s funeral cortege and placing of the coffin in the Museum’s National Historic Landmark Roundhouse. One of the trains at the museum will be decorated exactly like Lincoln’s funeral train and will be on display for the rest of 2015.

The first 1.5 miles of mainline railroad right of way carries visitors on seasonal train rides to the site where the First Stone of the Baltimore & Ohio Rail Road was laid on July 4, 1828 by Charles Carroll of Carrollton, last living signer of the Declaration of Independence. Train rides are offered at the B&O in Baltimore Wednesday through Sunday, April through December and weekends in January. Please visit the website for details on times and train rides for special occasions. Admission for the train is $3 for adults and seniors and $2 for children 2-12. (There are no train rides at the Ellicott City Musueum, only in Baltimore.)

The Wayside Inn in Ellicott City is the perfect place to serve as your home base while you’re in the area. Our bed and breakfast offers six different beautiful rooms, and a stay at The Wayside in includes a fresh made breakfast every morning. Like the B&O Railroad Museums, the Wayside Inn allows you to get lost in history. The Wayside Inn was built more than 200 years ago, and has been lovingly restored to offer you the perfect location for a relaxing getaway.