American history. Regional charm. Stunning landscapes. The area around Washington DC draws people away from the hustle of the nation’s Capital to enjoy a few days in relative peace and quiet. If you’re looking for weekend getaways from DC, Ellicott City is a rewarding choice.

Ellicott City has been named one of the “Top 25 Most Uniquely American Cities and Towns” in a 2009 Newsmax magazine article. Author and CBS News travel editor Peter Greenberg listed Main Street as one of the compelling factors. Whereas DC is “haunted” by the great American historic figures, you’ll experience a taste of what normal life was like when America was young.

Interestingly–and spookily–Ellicott City has been called one of the most haunted small towns on the east coast. The Howard County Tourism Council runs a Ghost Tour including sites such as mansions Lilburn, Hayden House, and Mt. Ida; the B&O railroad bridge that crosses over Main Street in the center of the town; the old Ellicott City Firehouse; and the Patapsco Female Institute.

The “Ye Haunted History of Olde Ellicott City” tour can be enjoyed on Fridays and Saturdays at 8:30pm, April through November.

Or for a bit of a long weekend, you can take a Spirits of Ellicott City tour on the third Thursday of each month at 8pm. This tour will attract vinophiles as well–part of the Spirit is having the option of purchasing a drink at each stop, including at The Wine Bin, which offers a sample at no cost. 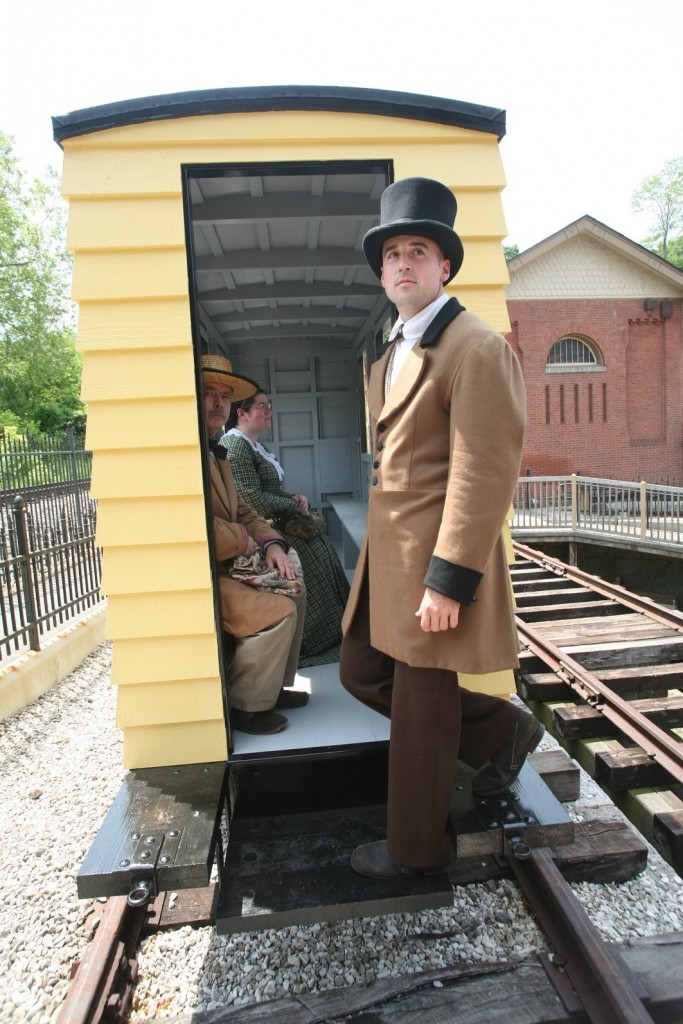 On one of your weekend getaways from DC, visit Ellicott City’s B&O Railroad Station–America’s first!

The five block historic district is lined with 50+ boutiques and bistros. Downtown Ellicott City, though it be small, it be celebrated: it’s been featured as a shoppers’ haven in the New York Times and Southern Living, and a foodies’ heaven in the Washingtonian.

Ellicott City’s appeal is current as well as historic: it was ranked second in MONEY magazine’s “Top 100 Best Places to Live in America.” Those same community amenities and attractions that make Ellicott City such an enchanting place to live, make Ellicott City a delightful place to weekend in every season.

Weekend getaways from DC don’t have to mean distancing yourself from culture. Ellicott City hosts a number of cultural events on an approachable scale.

Ellicott City is home to the celebrated Chesapeake Shakespeare Company and it’s Outdoor Shakespeare. As the company puts it, “‘To Be or Not To Be’ isn’t the question, its to BE experiencing the Bard’s best works perched above historic Ellicott City in the stabilized ruins of a Victorian school for girls in your flip-flops and NOT TO BE a theatre in a tux and tails!”

The company’s innovative and entertaining performances are a regional favorite.

Each July, Ellicott City hosts a fascinating and delightful artistic event called Paint It: Ellicott City, A Juried Plein Air. It’s a weekend of watching artists work among the heritage sites, delightful shops, gorgeous gardens and handsome homes of historic Ellicott City. You’ll see groups of plein air artists gathered within stated boundaries of a scenic area for what is called a “paint-out.”

The weekend begins with an artists welcome reception, 3-day paint-out throughout town, and final gallery reception and sale.

During the third weekend in September, Ellicott City’s retailers and restaurateurs warmly welcome visitors and residents for a lovely fall afternoon of music, light fare, a beer garden, sidewalk sales, and more. It’s a wonderful bookend to the outdoor season along with the opening Spring Festival.

There’s no better way to enjoy Ellicott City than by booking your stay at the historic Wayside Inn. And don’t forget to download our free area Vacation Guide to plan your visit.