Explore US Naval History Aboard the S.S. John W. Brown 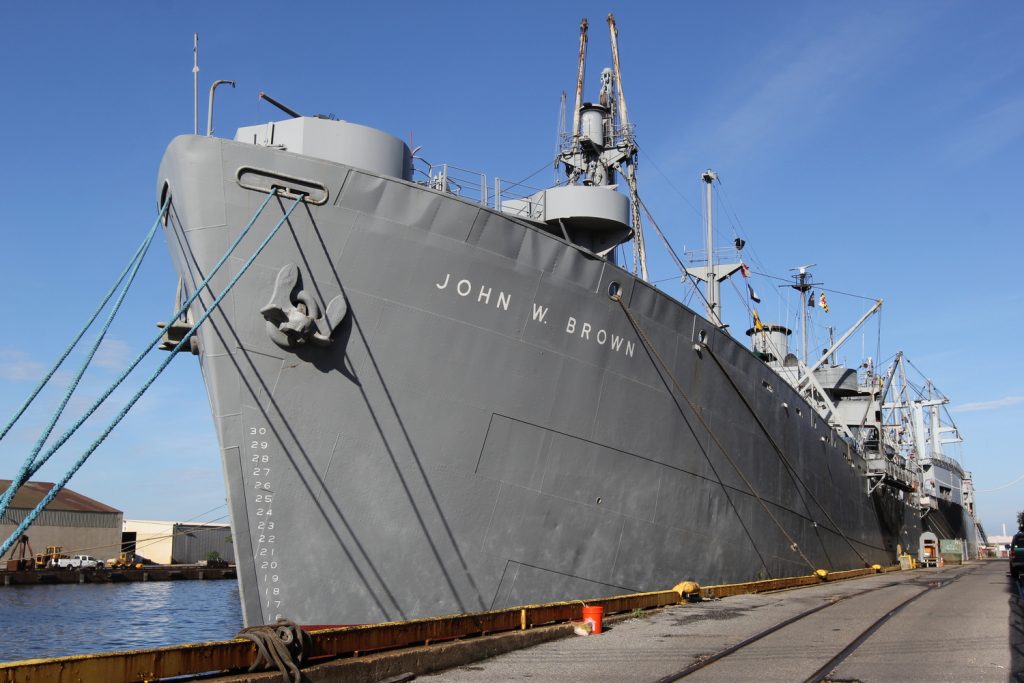 Sail aboard the S.S. John W. Brown in Baltimore!

About the S.S. John W. Brown

This ship holds the special distinction of being the last remaining troop transport from WWII and the last to have landed troops ashore as part of an amphibious landing. It is also the oldest remaining Liberty Ship in the world.

It was built in and now is homeported in Baltimore.  It is a museum and maritime education center open to all ages.

The Ship’s Roles Through the Years

Designed as cheap and quickly built cargo steamers, the Liberty ships were crucial to the movement of cargo during the war era. The S.S. John W. Brown has been restored to the way she looked when she held status as a WWII merchant ship. The Brown launched in Baltimore in 1942, and she has returned home. During the war, she made 13 voyages everywhere from the Persian Gulf to Russia, the Caribbean and Cape Horn. She carried troops as part of the invasion force in Southern France.

Incredibly, in 1946 she was given an unlikely role: school. The Brown served as the only floating maritime high school in the United States, in New York City. She served as the site of equipping students for careers in the merchant marine until 1982.

In 1988, she was acquired by Project Liberty Ship, Inc., in 1988. She was moved to Baltimore to serve as a museum ship and memorial.

The John W. Brown in Baltimore

On Saturday, October 1, you can actually cruise aboard the S.S. John W. Brown.

As the only Liberty ship on the East Coast, the S.S. John W. Brown’s special status in Baltimore is made all the more compelling. Listed in the National Register of Historic Places, she now fulfills the important role of memorializing the shipyard workers, merchant seamen and Naval Armed Guard who relied on her service.

On October 1, you can have the rare experience of actually sailing aboard the S.S. John W. Brown on a Living History Cruise.

You’ll sail back into WWII aboard this national treasure, powered by the original triple expansion steam engine. You’ll meet soldiers, marines, sailors and civilian reenactors who will set the scene and tell the story in a truly immersive experience. And if you’ve ever wished you could see an authentic USO Show, you will aboard the Brown!

We’d love to host you at nearby Wayside Inn in historic Ellicott City. Immerse yourself in regional history at our Inn, prepare for your voyage with a delicious breakfast, and use our free Baltimore-area vacation guide to help plan the rest of your journey.