In Baltimore, you find historic sites just about everywhere you turn. If you’re a lover of the theater, the historic Hippodrome Theatre is a must-experience stop.

History of the Hippodrome Theatre 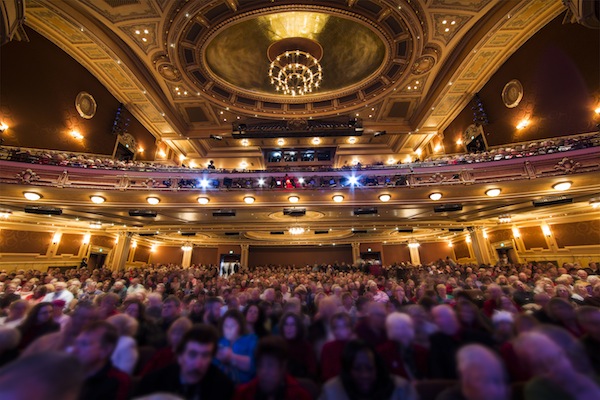 The Hippodrome Theatre is an architectural gem.

Designed by famous theater architect Thomas Lamb, the Hippodrome Theatre opened in 1914 to show movies and vaudeville. By 1920, the Hippodrome hosted 30,000 attendees a week! With live music provided by an organ and later an orchestra, the stage was graced with stars: Bob Hope, Jack Benny, Red Skelton, Benny Goodman and his orchestra, Dinah Shore, Martha Raye, Milton Berle, the Andrews Sisters and Morey Amsterdam. It was in The Hippodrome that Frank Sinatra first appeared with the Tommy Dorsey Orchestra and in 1939 with Harry James’ band.

After a few decades of declining business, the theater closed in 1990. But that’s not where the story ends. In 2004 the Hippodrome reopened as part of The France-Merrick Performing Arts Center. The Center saved not only the Hippodrome but two other important historic buildings: the Western National Bank (built in 1887) and the Eutaw Savings Bank (built in 1888).

Now a world-class venue, here you can see touring Broadway shows, dance, music, comedy, and all the best artists throughout the performing arts.

“Legacy” is an exciting new live show that celebrates the influence of Irish and Celtic music around the world. Featuring all new recordings, the songs on “Legacy” are varied in style and run the gamut from classic Irish folk songs and ballads such as “Danny Boy” and “Buachaille On Eirne” to the more contemporary hits “Falling Slowly” and “Ride On” and rousing anthems “Caledonia” and “Ireland’s Call”.

Jersey Boys is the Tony®, Grammy® and Olivier Award-winning Best Musical about Rock and Roll Hall of Famers The Four Seasons: Frankie Valli, Bob Gaudio, Tommy DeVito and Nick Massi. This is the true story of how four blue-collar kids became one of the greatest successes in pop musical history.

This Tony Award®-winning Broadway musical is delighting audiences with its contemporary take on the classic tale. This hilarious and romantic Rodgers + Hammerstein’s Cinderella combines the story’s classic elements-glass slippers, pumpkin, and a beautiful ball along with some surprise twists.

A Christmas Story – The Musical

Ralphie Parker wants only one thing for Christmas; An official Red Ryder® Carbine-Action 200-shot Range Model Air Rifle. A Christmas Story, The Musical is the hilarious account of Ralphie’s desperate quest to ensure that this most perfect of gifts ends up under his tree this Christmas. Directed by Tony Award®-winner John Rando.

The biggest Christmas experience of the year! The original, direct from Russia, Moscow Ballet’s Great Russian Nutcracker! Enchant the whole family with larger than life magical props, a 60 foot growing Christmas tree and spectacular Russian-made costumes and sets.
Find tickets for these and many more performances at the Hippodrome at the ticketing website. No matter when you visit, there’s sure to be excellent programming going on.

Come stay with us at the nearby Wayside Inn to round out your wonderful weekend away. And don’t forget to download our free area vacation guide!